The monsters are due on Hi Point Street. See pink?

Pinks are no more

LOS ANGELES- The Pinks are no more! They have been painted over white and will be demolished to make way for a 45 unit monster of luxury apartments.

Visitors to the unguarded tourist attraction are probably grateful they did not take home fleas, bed bugs, ticks, and every other varmint from the unguarded property. Now the “no trespassing signs” are up. Amazingly no one told tourists that there was still someone living on one of the to-be-demolished properties. What an insult!

[It seems only in America can neighbors force a person to paint their house a certain color. Boy, with just one tenth of that effort maybe we could end world hunger, or end racism, or end economic discrimination. In all fairness though it wasn’t just the houses but also the sidewalks that were painted pink.]

The Pinks at 1500 Hi Point St have been painted white. No one told tourists there was still someone living on one of the properties!

“Standing in the Apt House Door Part I of II ”

LOS ANGELES- FAIRCREST HEIGHTS. Members of the Millenium Panthers have visited the Pinks and are investigating race claims on Hi Point Street.

The white city code enforcement inspectors have refused to cite NEARBY 1522 Hi Point St Apts for non-working intercoms even though mostly whites have them while two Blacks do not.    The city government Gestapo Storm Troopers under Mayor Eric Garcetti have refused to order the intercoms repaired or replaced. City employees Robert Galardi, Presidliano Sandoval, Lee Smith, Daniel Williams, Charles Garcia, Michael Soto and others are the same ones who admitted Black tenant at this address were cheated out of THP due process rights. Hi Point Apts owner/agent Walter Barratt. Williams Real Estate Advisors, Inc. Resident Manager Cynthia Ogan. Black tenants has been denied intercom repair and rent reduction for over three years. See the code compliance copy  below that does not mention the lowered water pressure and non-working intercom in unit 9. Apparently Garcetti’s goons do not know what an intercom is but they and the Rent Control Department employees get paid over $100,000 per year to discriminate against Blacks! 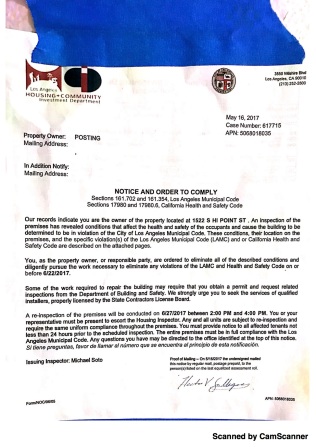 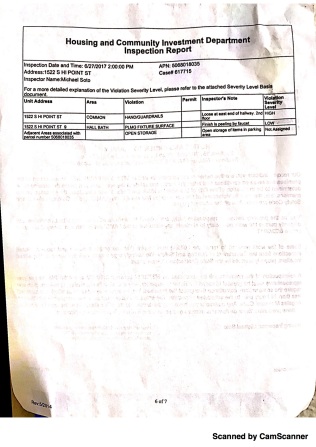 As if to say, “Blackie, you don’t need no intercom —-just stick your head out the window and holler!”

One reporter asked, “How many whites does it take to fix an intercom?”

Videos will be posted soon showing the city employee Gestapo Storm Troopers who inspected Hi Point Apts beginning March 2017 to tell a Black he is not entitled to intercom service same as white citizens in the building.

Will the Culver City developers of the Pinks bring more of the same racism to Hi Point Street?

PROPERTY OWNERS AND TENANTS SHOULD DEMAND A CITY GOVERNMENT MORATORIUM IN SUPPORT OF NON-ELIMINATION OF STREET PARKING DURING AND AFTER THE PINKS CONSTRUCTION. TO PROHIBIT LOSS OF STREET PARKING.

I ASK FOR SUPPORT AND  A  PROMISE FROM THE DEVELOPER. 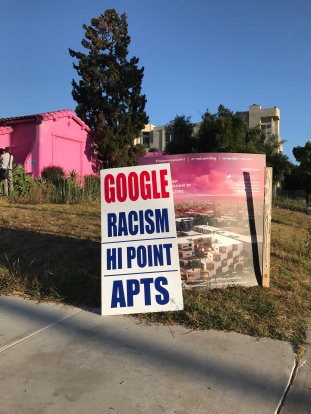 Join with the Panthers at Hi Point Street !

(b) All persons within the jurisdiction of this state are free and equal, and no matter what their sex, race, color, religion, ancestry, national origin, disability, medical condition, genetic information, marital status, sexual orientation, citizenship, primary language, or immigration status are entitled to the full and equal accommodations, advantages, facilities, privileges, or services in all business establishments of every kind whatsoever.

“All persons within the jurisdiction of the United States shall have the same right in every State and Territory to make and enforce contracts, to sue, be parties, give evidence, and to the full and equal benefit of all laws and proceedings for the security of persons and property as is enjoyed by white citizens, and shall be subject to like punishment, pains, penalties, taxes, licenses, and exactions of every kind, and to no other.”

LOS ANGELES- How about I paint a trash can blue and call it an artifact. Do you think the public will respond?

That is essentially what has happened in the last week or so in the so-called used to be predominately-Black-neighborhood-now-Eric-Garcetti-gentrification-zone of quaint Faircrest Heights neighborhood of Pico and Saturn. 1500 Hi Point Street, a few doors from 1522 Hi Point Street.

For better or worse, someone selected three-four homes that were authorized by the city government of Los Angeles as ready for demolition. [It is unclear at this point who is legally responsible for the insurance on these properties because the properties are under the city jurisdiction to be demolished.]

No respect for area residents

Then that person [future architect, future owner, management company. etc.] painted the properties pink. Sounds trivial? Not to the marketing people and the hundreds who have travelled far and wide not just to see the I call it “pink trash” but to take selfie pictures with the houses. Check out Twitter and Instagram. Can you say TOURIST ATTRACTION?

To step back a few weeks, these houses were previously occupied by real live people. They were all displaced and may have been compensated but nonetheless may have suffered emotionally due to the displacement.

Currently, neighbors to the properties suffer from the eyesore. When the properties are destroyed very soon, it is not the tourists who will suffer, it is the neighbors and homeowners who will experience negative impact on traffic, permanent removal of over ten street parking spaces, loss of neighborhood character, impact on local infrastructure; and pollution, noise, congestion related to construction.

While this uninsured circus continues, current area residents find their already scant parking spaces replaced by tourists who come to see THE PINKS.

It seems the architect of this Tourist Attraction, no matter how temporary, had no respect to at least issue a flyer warning area property owners and apartment dwellers of the coming onslaught to quiet enjoyment of the neighborhood. Or even seeking input from the neighbors. NO RESPECT.

In gentrification areas, it is primarily [but not always] Blacks who are OUT and whites who are IN. That is not something to celebrate.

I’m sure almost 100% that many of those tourists would not put up with this in their OWN neighborhoods.

Who will compensate tenants if they are injured on THE “no trespassing” PINKS? Shouldn’t a site set for demolition be boarded up or fenced in? What city employee approved THE PINKS’ circus?

[ The Monsters are Due on Maple Street by Rod Serling as it appears in Wikipedia.] 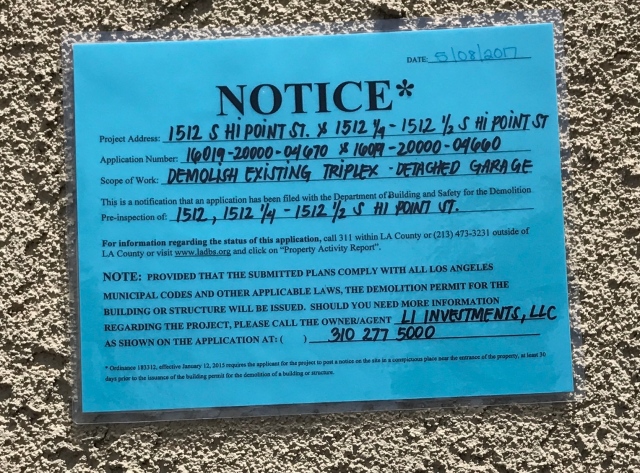